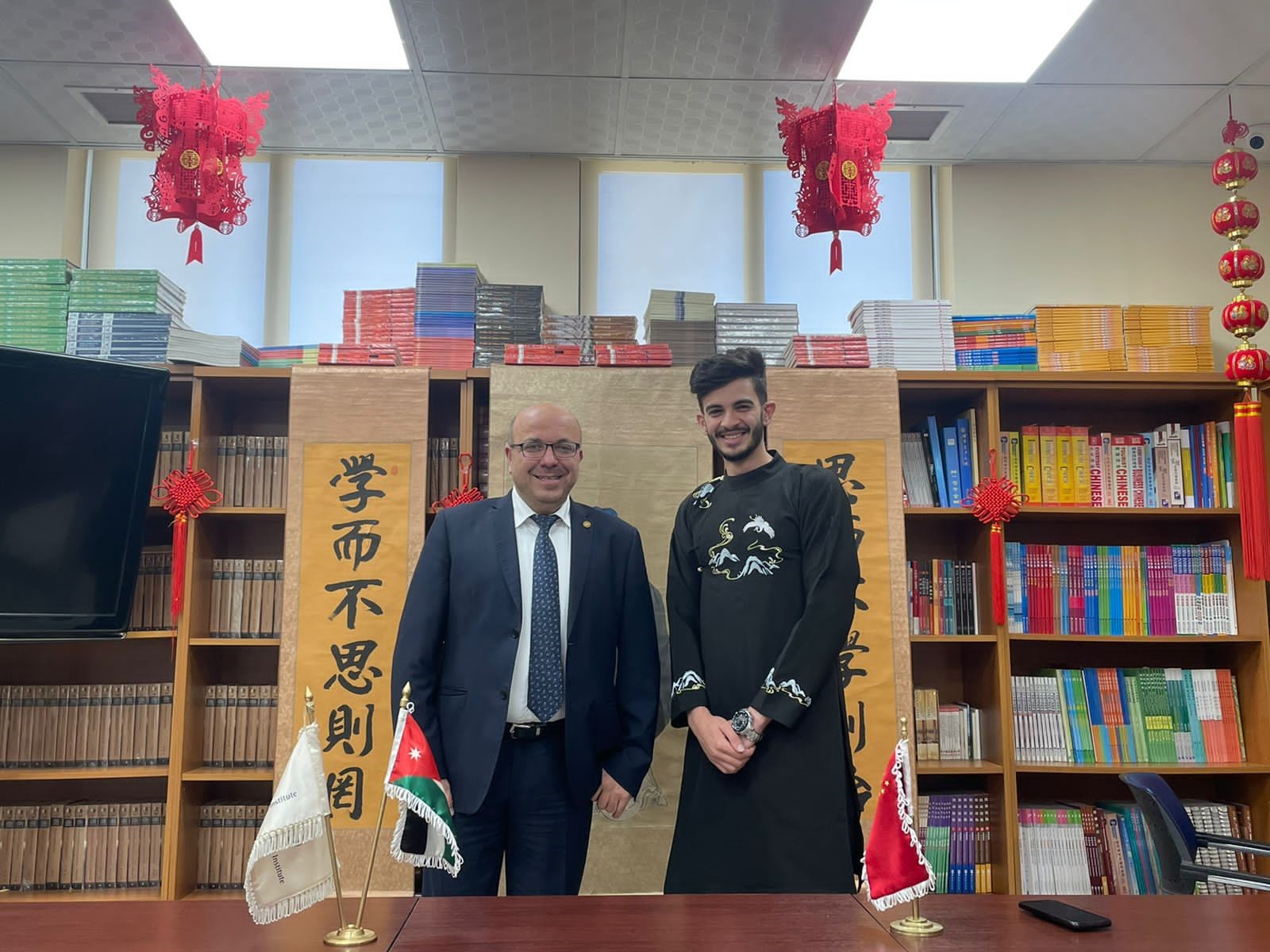 Chinese Ambassador to Jordan Chen Chuandong, Chinese Director of TAG-Confucius Institute (TAG-CI) Dr. Yang Songfang and Jordanian Director of TAG-CI Mamoun Abu Al-Sebaa, Dean of Department of Asian Languages of the University of Jordan (UJ) Bagdagul Mussa, Jordanian Director of Confucius Institute at Philadelphia University (CIPU) Dima Malahmeh attended the competition. The top 10 winners of the semi-final competed in the final, who were from TAG-CI, UJ, CIPU and Yarmouk University. The teachers and students from Chinese-teaching institutions in Jordan watched the competition.

Chen Chuandong said in his speech that in the history of human civilization, both Chinese civilization and Arab civilization have accomplished splendid achievements. The integration and mutual learning of the two civilizations can be regarded as a model of harmonious coexistence among different civilizations.

We get together to enjoy the annual “Chinese Bridge” competition out of the love for Chinese language and culture and the cherished friendship between China and Jordan. It’s hoped that young Jordanian friends can deepen their understanding of Chinese history and culture through the platform of “Chinese Bridge”, and the young people of the two countries will be the participants and promotors of China-Jordan friendship and contribute to the prosperous future of the relations between China and Jordan.

The theme of the competition was “One World One Family”, including keynote speech, questions-answers on Chinese language, national conditions and culture, and Chinese talent show.

In the speech session, the contestants described their understanding of “One World One Family” and their yearning for a better and peaceful world, shared their experience of learning Chinese language, expressed their love for Chinese language and culture, talked about China-Jordan friendship and hoped that there would be a prosperous future of the relations between China and Jordan.

The talent show pushed the competition to the climax. The contestants made every effort to show the best of themselves. They performed calligraphy, songs, painting, paper-cutting, handicraft, monologue crosstalk, poetry recitation, etc., bringing the audience a wonderful artistic performance.

The “Chinese Bridge” competition and “The Great Wall-Petra Cup” competition is an important annual event of Chinese teaching and learning in Jordan. Under the guidance of the teachers, the contestants prepare carefully and participate actively.

The competition creates a stage for Jordanian college students to demonstrate their Chinese ability, builds a platform for mutual learning and communication, stimulates their enthusiasm for learning Chinese, and enhances their understanding of China and Chinese culture.

The competition was sponsored by Center for Language Education and Cooperation and Chinese Embassy in Jordan, and organized by the University of Jordan and Amman Chinese Cultural Center.