Chinese cuisine is an important part of Chinese culture, which includes cuisine originating from the diverse regions of China, as well as from Chinese people in other parts of the world. Because of the Chinese diaspora and historical power of the country, Chinese cuisine has influenced many other cuisines in Asia, with modifications made to cater to local palates. Chinese food staples such as rice, soy sauce, noodles, tea, and tofu, and utensils such as chopsticks and the wok, can now be found worldwide.
The preference for seasoning and cooking techniques of Chinese provinces depend on differences in historical background and ethnic groups. Geographic features including mountains, rivers, forests and deserts also have a strong effect on the local available ingredients, considering that the climate of China varies from tropical in the south to subarctic in the northeast. Imperial, royal and noble preference also plays a role in the change of Chinese cuisines. Because of imperial expansion and trading, ingredients and cooking techniques from other cultures are integrated into Chinese cuisines over time.
The most praised "Four Major Cuisines" are Chuan, Lu, Yue and Huaiyang, representing West, North, South and East China cuisine correspondingly.
The modern "Eight Cuisines" of China are Anhui (Huīcài), Cantonese (Yuècài), Fujian (Mǐncài), Hunan (Xiāngcài), Jiangsu (Sūcài), Shandong (Lǔcài), Sichuan (Chuāncài), and Zhejiang (Zhècài) cuisines.

Color, smell and taste are the three traditional aspects used to describe Chinese food, as well as the meaning, appearance and nutrition of the food. Cooking should be appraised with respect to the ingredients used, knifework, cooking time and seasoning.

Chinese society greatly valued gastronomy, and developed an extensive study of the subject based on its traditional medical beliefs. 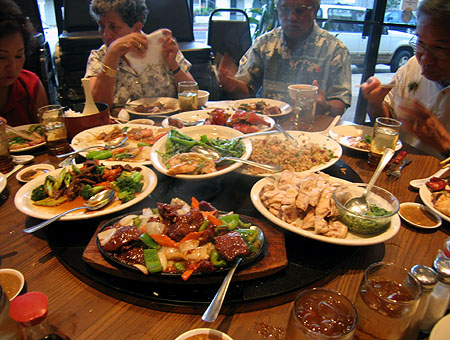 The first domesticated crops seem to have been the foxtail and broomcorn varieties of millet, while rice was cultivated in the south. By 2000 BC, wheat had arrived from western Asia.

These grains were typically served as warm noodle soups instead of baked into bread as in Europe.
Nobles hunted various wild game and consumed mutton, pork and dog as these animals were domesticated.
Grain was stored against famine and flood and meat was preserved with salt, vinegar, curing, and fermenting.

The flavor of the meat was enhanced by cooking it in animal fats though this practice was mostly restricted to the wealthy.

There is no limit for alcohol, before a man gets drunk.
During Shi Huangdi's Qin dynasty, the empire expanded into the south.

By the time of the Han dynasty, the different regions and cuisines of China's people were linked by major canals and leading to a greater complexity in the different regional cuisines. Not only is food seen as giving "qi", energy, but food is also about maintaining yin and yang.

The philosophy behind it was rooted in the I Ching and Chinese traditional medicine: food was judged for color, aroma, taste, and texture and a good meal was expected to balance the Four Natures ('hot', warm, cool, and 'cold') and the Five Tastes (pungent, sweet, sour, bitter, and salty).
Salt was used as a preservative from early times, but in cooking was added in the form of soy sauce, and not at the table.

The predominance of chopsticks and spoons as eating utensils also necessitated that most food be prepared in bite-sized pieces or (as with fish) be so tender that it could be easily picked apart.
By the Later Han period (2nd century), frequently complained of lazy aristocrats who did nothing but sit around all day eating smoked meats and roasts.

During the Han dynasty, the Chinese developed methods of food preservation for military rations during campaigns such as drying meat into jerky and cooking, roasting, and drying grain.

Chinese legends claim that the roasted, flat bread shaobing was brought back from the Xiyu(the Western Regions, a name for Central Asia) by the Han dynasty General Ban Chao, and that it was originally known as hubing ("barbarian bread").

The shaobing is believed to be descended from the hubing.

Shaobing is believed to be related to the Persian Nan and Central Asian Nan, as well as the Middle Eastern pita. Foreign westerners made and sold sesame cakes in China during the Tang dynasty. During the Southern and Northern Dynasties non-Han people like the Xianbei of Northern Wei introduced their cuisine to northern China, and these influences continued up to the Tang dynasty, popularizing meat like mutton and dairy products like goat milk, yogurts, and Kumisamong even Han people.

It was during the Song dynasty that Han Chinese developed an aversion to dairy products and abandoned the dairy foods introduced earlier.

The Han Chinese rebel Wang Su who received asylum in the Xianbei Northern Wei after fleeing from Southern Qi, at first could not stand eating dairy products like goat's milk and meat like mutton and had to consume tea and fish instead, but after a few years he was able to eat yogurt and lamb, and the Xianbei Emperor asked him which of the foods of China (Zhongguo) he preferred, fish vs mutton and tea vs yogurt.

The great migration of Chinese people south during the invasions preceding and during the Song dynasty increased the relative importance of southern Chinese staples such as rice and congee. Su Dongpo has improved the red braised pork as Dongpo pork.

During the Yuan dynasty many communities emerged in China, who practiced a porkless cuisine now preserved by Hui restaurants throughout the country.[citation needed] Yunnan cuisine is unique in China for its cheeses like Rubing and Rushan cheese made by the Bai people, and its yogurt, the yogurt may have been due to a combination of Mongolian influence during the Yuan dynasty, the Central Asian settlement in Yunnan, and the proximity and influence of India and Tibet on Yunnan.

As part of the last leg of the Columbian Exchange, Spanish and Portuguese traders began introducing foods from the New World to China through the port cities of Canton and Macau. Mexican chili peppers became essential ingredients in Sichuan cuisine and calorically-dense potatoes and corn became staple foods across the northern plains.
During the Qing Dynasty, Chinese gastronomes such as Yuan Mei focused upon a primary goal of extracting the maximum flavor of each ingredient.
As noted in his culinary work the Suiyuan shidan, however, the fashions of cuisine at the time were quite varied and in some cases were flamboyantly ostentatious, especially when the display served also a formal ceremonial purpose, as in the case of the Manchu Han Imperial Feast.
As the pace of life increases in modern China, fast food like fried noodles, fried rice and gaifan (dish over rice) become more and more popular.