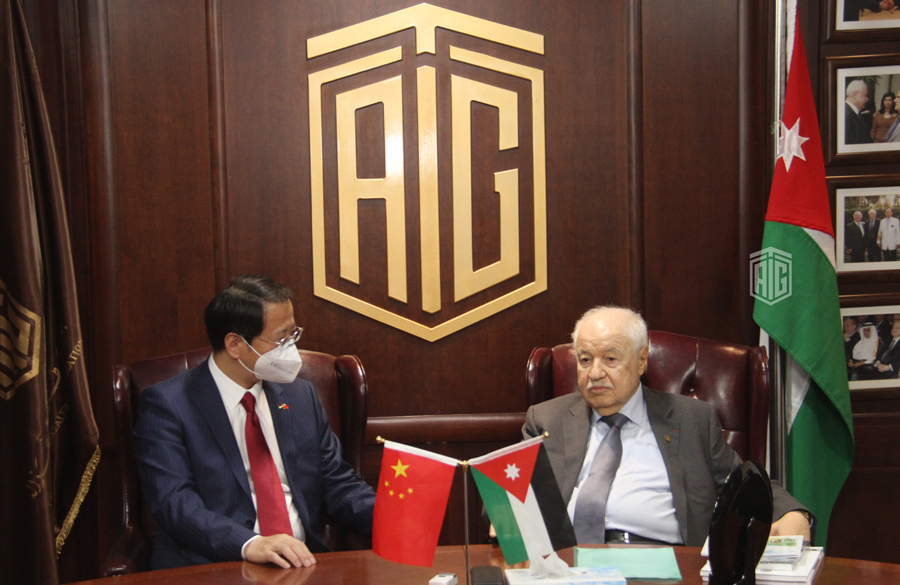 During the meeting, the Ambassador presented Dr. Abu-Ghazaleh a commemorative pin from the Chinese Embassy on the occasion of the 45th anniversary of the establishment of Sino-Jordanian diplomatic relations.
During the meeting, the Chinese Ambassador stated the relations between China and Jordan are constantly getting stronger, as the two countries have worked together to protect their sovereignty and national security, as well as to promote economic and social development.
He further highlighted the role Dr. Abu-Ghazaleh plays in contributing to the development of these relations, the reason why he was honored by the Chinese President, His Excellency Xi Jinping, for his distinguished contributions to enhancing these ties and was given the Award for Outstanding Contributions to Sino-Arab Friendship - the first Chinese initiative of its kind. 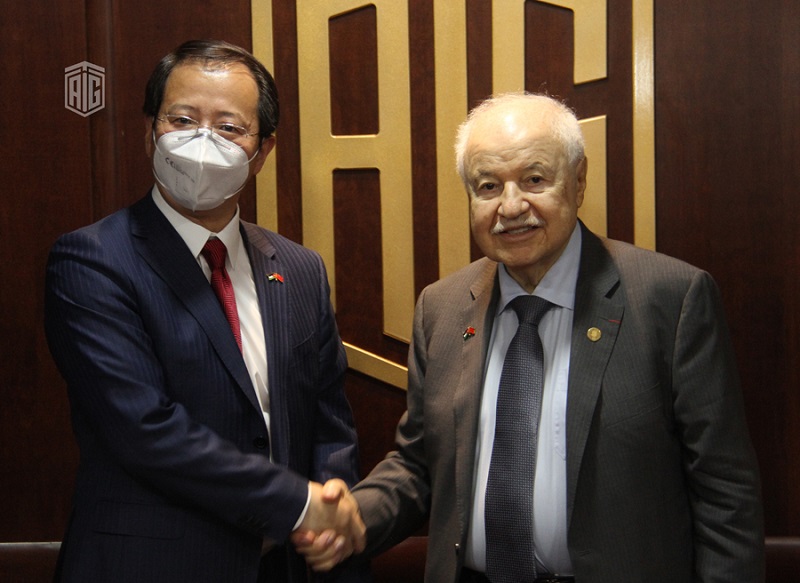 Ambassador Chen Chuandong also stated that the China welcomes all Jordanian companies to invest and do business in the country, and at the same time, encourages specialized Chinese companies to invest in Jordan in order to increase bilateral investment, urging the Jordanian side to continuously maintain and offer a successful and transparent business environment.
For his part, Dr. Abu-Ghazaleh expressed his gratitude for such an honor and appreciation, stressing the importance of Jordanian-Chinese relations, which His Majesty King Abdullah II has been always keen to develop in the public and private sectors alike, noting that this year marks the celebrations of the 45th anniversary of diplomatic relations between the two countries.

Dr. Abu-Ghazaleh also confirmed his eagerness, through TAG.Global, to contribute to the development of these relations by placing the Organization’s expertise and services to serve this goal, pointing out that TAG.Global was the first Arab company to open its offices in the People's Republic of China.
Moreover, Dr. Abu-Ghazaleh indicated the need to benefit from the Chinese expertise, especially in the digital transformation field which became one of TAG.Global’s top priorities as it is currently leading the digital transformation project in the Arab region; by signing cooperation agreements with the League of Arab States to carry out this task. Abu-Ghazaleh called on the Chinese Ambassador to take part in this important project for both parties.
On the cultural front, Dr. Abu-Ghazaleh stated that TAG.Global is the first private sector company in the world to sign a joint cooperation agreement with China in the cultural field by establishing Talal Abu-Ghazaleh Confucius Institute (TAG-CI) that aims at teaching and promoting the Chinese language, culture and civilization among the Jordanian people by holding various cultural events and activities. That is in addition to helping provide scholarships to individuals interested in studying at Chinese universities.
At the end of the meeting, Dr. Abu-Ghazaleh presented the Chinese Ambassador some TAG.Global’s publications that have been translated into the Chinese language including ‘Investment in Jordan’ and ‘Chinese Language for Businessmen’. The two-books aim at attracting and encouraging Chinese investment to Jordan; as it is considered an important part of the ‘Belt and Road Initiative’ which focuses on increasing trade exchange between the two countries.