On June 17, the final of the 20th “Chinese Bridge” Chinese Proficiency Competition for Foreign College Students in Jordan and the 12th “The Great Wall-Petra Cup” Chinese Proficiency Competition for Jordanian College Students was held online, which was sponsored by Center for Language Education and Cooperation and Chinese Embassy in Jordan. Chinese Ambassador to Jordan Chen Chuandong, Cultural Counselor Yang Ronghao, Former President of Philadelphia University in Jordan Mohammad Awad, Chinese Director of TAG-Confucius Institute (TAG-CI) Dr. Yang Songfang, Chinese Director of Confucius Institute at Philadelphia University (CIPU) Wang Fang attended the competition. The top 10 winners of the semi-final competed in the final, who were from TAG-CI, the University of Jordan (UJ) and CIPU. The teachers and students from Chinese-teaching institutions and the employees of Chinese enterprises in Jordan watched the competition online. 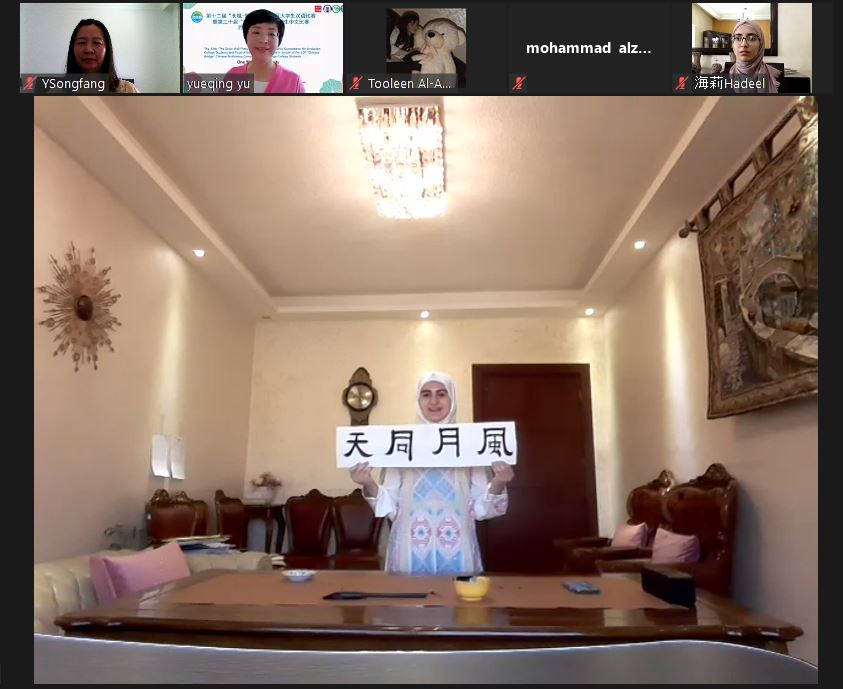 Chen Chuandong said in his speech that due to Covid-19 pandemic, the “Chinese Bridge” competition was held online. However, as the Chinese poet Zhang Jiuling said in his poem, “Intimate friends have nothing to do with distance. Even if they are thousands of miles apart, they are still like neighbors.” Because of our love for Chinese language and culture, we got together online for this Chinese competition. He pointed out that although the pandemic is raging, all countries have never shared weal and woe as they do today. China and Jordan cooperate in fighting the pandemic and jointly continue to write a new chapter of friendship. The people-to-people exchanges between China and Jordan have a long history and fruitful results, which have injected inexhaustible impetus into the development of China-Jordan friendly partnership.  2021 is of special significance to both China and Jordan. This year witnesses the 100th anniversary of the founding of the Communist Party of China and the 100th anniversary of the founding of Jordan. Standing at a new historical starting point, the future of China-Jordan relations is promising.

Chen Chuandong hoped that Jordanian students would work hard to learn Chinese well so as to act as the bridge between China-Jordan exchanges and be the participants and contributors to the friendship between China and Jordan in the future.

Awad said in his speech that he hoped the pandemic would end as soon as possible and people could have an in-person gathering. He thanked Chinese Embassy in Jordan for the support for China-Jordan cooperation. Awad was proud of the achievements made by the contestants in Chinese learning, and hoped that the students would continue to work hard, make continuous progress and make great contributions to the friendly exchanges and cooperation between China and Jordan.

The theme of the competition was “One World One Family”, including keynote speech, questions-answers on Chinese language, national conditions and culture, and talent show. The judges were composed of the representative from Chinese Embassy, Chinese teachers from China and local Chinese teachers in Jordan.
In the keynote speech, the contestants shared their experience of learning Chinese and the story of studying in China; told the touching stories of friendly cooperation and joint efforts to fight the pandemic among China, Jordan, and other countries; thanked China for its contributions to the world’s economic development and its responsibility of a major power; expressed the beautiful vision of “One World One Family”, with accurate pronunciation and moving content of the speech.

The questions in Q&A session covered Chinese language, culture, history, geography, philosophy, music, painting, sport, traditional Chinese medicine, economics, science and technology, etc. The contestants were able to answer the questions correctly with ease, fully demonstrating their profound knowledge and humanistic quality and leaving a deep impression on the audience and judges.
The talent show pushed the competition to the climax. The contestants made every effort to show the best of themselves. They performed calligraphy, paper-cutting, Chinese knots, dance and songs, etc., providing the audience with a wonderful video-audio feast.

The “Chinese Bridge” competition and “The Great Wall-Petra Cup” competition is an important annual event of Chinese learning in Jordan. Under the guidance of the teachers, the contestants prepare carefully and participate actively, showing their love for Chinese language and culture with wonderful performances.

The competition creates a stage for Jordanian college students to demonstrate their Chinese ability, builds a platform for mutual learning and communication, stimulates their enthusiasm for learning Chinese, and enhances their understanding of China and Chinese culture.