History of Agriculture in China

History of Agriculture in China

For 4,000 years China has been a nation of farmers. By the time the People's Republic of China was established in 1949, virtually all arable land was under cultivation; irrigation and drainage systems constructed centuries earlier and intensive farming practices already produced relatively high yields. But little prime virgin land was available to support population growth and economic development. However, after a decline in production as a result of the Great Leap Forward (1958–60), agricultural reforms implemented in the 1980s increased yields and promised even greater future production from existing cultivated land. 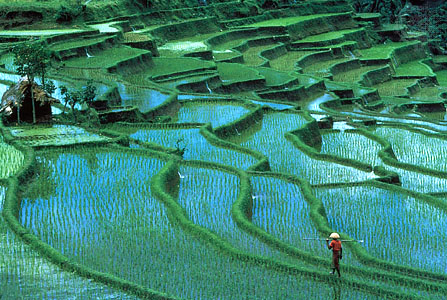 The population doubled as new lands were settled in Fujian, Guangzhou, and Guangxi provinces, new crops were introduced, and irrigation systems were improved.

The mountainous areas in southeastern China were developed in the Ming-Qing period by migrants from overcrowded areas. They specialized in new crops such as (such as corn), and the rapid increase in demand for certain crops (such as tea) in foreign markets.

It is certainly true that Chinese expertise in agriculture, as in many other branches of knowledge, still rivalled and surpassed anything known in the West when the Jesuits arrived at the Ming court. Early visitors marvelled at the high productivity of Chinese farming, its ingenious crop rotations, sophisticated water-raising devices and other equipment, and the rationality and industry of the Chinese peasant farmer.

They were also struck by the predominant position accorded to agriculture in the Chinese political economy, where it was known as 'the fundamental' (pen).

This was a crucial influence on the theories of the French school of political economists, the Physiocrats, who like the Chinese philosophers insisted that agriculture, rather than commerce or industry, was the only source of true and enduring wealth.

Qing era 1644-1911
In the pre-1949 era 90% of the population lived by agriculture, from poor tenant farmers to rich landlords. [5] Many were very poor tenants or day laborers, others especially in the southern provinces were better off and more secure by owning their land.

Confucians who controlled China praised agriculturalists as honest men who provided the nation's food. Famines and floods were serious risks.

To forestall local rebellions the Qing government established an elaborate system to protect against famines and other disasters such as epidemics. It was built around a granary system that store grain. It minimized famine distress by distributing free or low-cost grain. However the system was largely destroyed during the Taiping rebellion of the 1850s, putting this large element of population at risk to flooding, droughts, pestilence, and other causes of famines.

The introduction of a major new food supply in sweet potatoes sharply reduced the excess hunger and reduced the frequency of revolts.

After suppressing rebellions in the 1860s, the national government worked to relieve distress, stabilize society and improve farming. It reduced taxes and required corvée labor, reclaimed land, and promoting irrigation.

The reforms in agriculture were one dimension of a vigorous last-minute effort by the Ching government to rapidly reform education, the military, and local administration.

Since 1949
Since 1949 China's political leaders have tried a variety of large-scale social experiments to boost agricultural production. First, a massive land reform program eliminated landlords and gave land to those who farmed it.

Next, farm families were progressively organized into cooperatives, collectives, and finally people's communes. After more than twenty-five years of experience with communes, officials abolished these institutions, which had become too bureaucratic and rigid to respond to the flexible requirements of agricultural production.

Townships and villages were organized, and new incentives were incorporated into contractual relationships tying farmers to economic cooperatives and businesses.

Since the revolution in 1949, China has devoted most of its investments and administrative energy to the industrial sector.

At the same time, more than 60 percent of the national labor force was employed in agriculture.

China in the late 1980s was thus poised to confront growing demands for Agricultural production with a combination of time-tested farming methods and modern agro-technology. The size and diversity of the country – in geography and in population – however, had presented a unique challenge to China's policy makers and implementers.