Fujian  alternately romanized as Fukien or Hokkien) is a province on the southeastern coast of China. Fujian is bordered by Zhejiang to the north, Jiangxi to the west, Guangdong to the south, and the Taiwan Strait to the east. 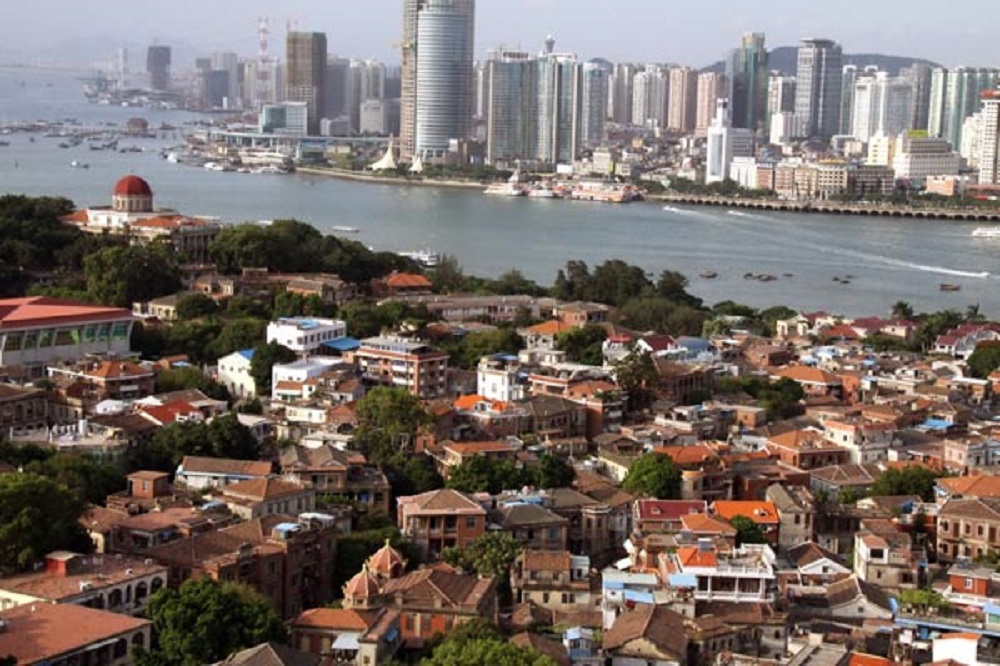 Its capital is Fuzhou, while its largest city by population is Quanzhou, both located near the coast of the Taiwan Strait in the east of the province.
While its population is predominantly of Chinese ethnicity, it is one of the most culturally and linguistically diverse provinces in China.

The dialects of the language group Min Chinese were most commonly spoken within the province, including the Fuzhou dialect of northeastern Fujian and various Hokkien dialects of southeastern Fujian. Hakka Chinese is also spoken, by the Hakka people in Fujian.

Min dialects, Hakka and Mandarin Chinese are mutually unintelligible. Due to emigration, a sizable amount of the ethnic Chinese populations of Taiwan, Singapore, Malaysia, Indonesia and the Philippines speak Southern Min (or Hokkien).

With a population of 39 million, Fujian ranks 17th in population among Chinese provinces. Its GDP is CN¥3.58 trillion, ranking 10th in GDP.

Along with its coastal neighbours Zhejiang and Guangdong, Fujian's GDP per capita is above the national average, at CN¥92,830. 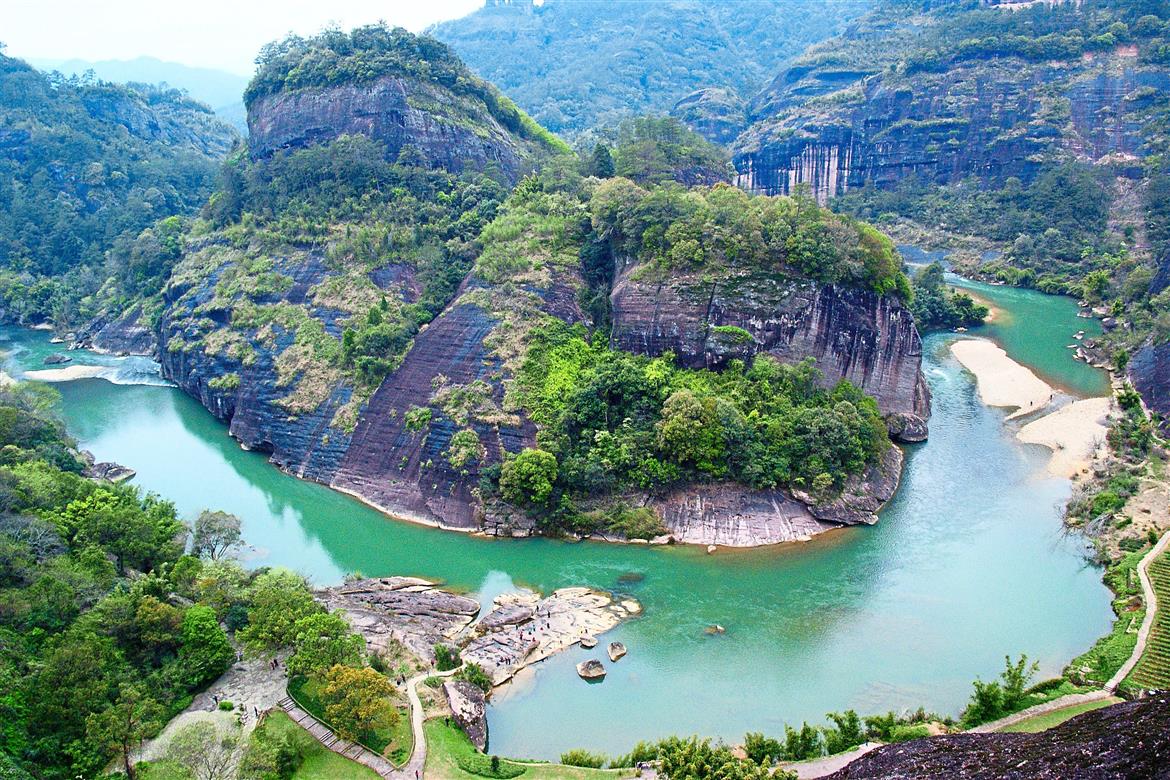 It has benefited from its geographical proximity with Taiwan. As a result of the Chinese Civil War, a small proportion of Historical Fujian is now within the Republic of China (ROC, Taiwan).
The Fujian province of the ROC consist of three offshore archipelagos namely the Kinmen Islands, the Matsu Islands and the Wuqiu Islands.

History
Prehistoric Fujian
Recent archaeological discoveries in 2011 demonstrate that Fujian had entered the Neolithic Age by the middle of the 6th millennium BC.

From the Keqiutou site (7450–5590 BP), an early Neolithic site in Pingtan Island located about 70 kilometres (43 mi) southeast of Fuzhou, numerous tools made of stones, shells, bones, jades, and ceramics (including wheel-made ceramics) have been unearthed, together with spinning wheels, which is definitive evidence of weaving.

The Tanshishan site (5500–4000 BP) in suburban Fuzhou spans the Neolithic and Chalcolithic Age where semi-underground circular buildings were found in the lower level.

Minyue kingdom
Fujian was also where the kingdom of Minyue was located.

The word "Mǐnyuè" was derived by combining "Mǐn" traditional Chinese and "Yuè", after the State of Yue, a spring and autumn period kingdom in Zhejiang to the north. This is because the royal family of Yuè fled to Fujian after its kingdom was annexed by the State of Chu in 306 BC. Mǐn is also the name of the main river in this area, but the ethnonym is probably older.

Qin dynasty
The Qin deposed the King of Minyue, establishing instead a paramilitary province there called Minzhong Commandery. Minyue was a de facto kingdom until one of the emperors of the Qin dynasty, the first unified imperial Chinese state, abolished its status.

In the aftermath of the Qin dynasty's fall, civil war broke out between two warlords, Xiang Yu and Liu Bang. The Minyue king Wuzhu sent his troops to fight with Liu and his gamble paid off. Liu was victorious and founded the Han dynasty. In 202 BC, he restored Minyue's status as a tributary independent kingdom. Thus Wuzhu was allowed to construct his fortified city in Fuzhou as well as a few locations in the Wuyi Mountains, which have been excavated in recent years. His kingdom extended beyond the borders of contemporary Fujian into eastern Guangdong, eastern Jiangxi, and southern Zhejiang.

After Wuzhu's death, Minyue maintained its militant tradition and launched several expeditions against its neighboring kingdoms in Guangdong, Jiangxi, and Zhejiang, primarily in the 2nd century BC.

This was stopped by the Han dynasty as it expanded southward. The Han emperor eventually decided to get rid of the potential threat by launching a military campaign against Minyue. Large forces approached Minyue simultaneously from four directions via land and sea in 111 BC. The rulers in Fuzhou surrendered to avoid a futile fight and destruction and the first kingdom in Fujian history came to an abrupt end.

Fujian was part of the much larger Yang Province (Yangzhou), whose provincial capital was designated in Liyang (歷陽; present-day He County, Anhui).

The Han dynasty collapsed at the end of the 2nd century AD, paving the way for the Three Kingdoms era. Sun Quan, the founder of the Kingdom of Wu, spent nearly 20 years subduing the Shan Yue people, the branch of the Yue living in mountains.

The first wave of immigration of the noble class arrived in the province in the early 4th century when the Western Jin dynasty collapsed and the north was torn apart by invasions by nomadic peoples from the north, as well as civil war. These immigrants were primarily from eight families in central China: Chen , Lin , Huang , Zheng , Zhan , Qiu , He , and Hu .

To this day, the first four remain the most popular surnames in Fujian.

Nevertheless, isolation from nearby areas owing to rugged terrain contributed to Fujian's relatively undeveloped economy and level of development, despite major population boosts from northern China during the "barbarian" invasions. Population density in Fujian remained low compared to the rest of China.

Only two commanderies and sixteen counties were established by the Western Jin dynasty. Like other southern provinces such as Guangdong, Guangxi, Guizhou, and Yunnan, Fujian often served as a destination for exiled prisoners and dissidents at that time.

During the Sui and Tang eras a large influx of migrants settled in Fujian.
During the Sui dynasty, Fujian was again part of Yang Province.
During the Tang, Fujian was part of the larger Jiangnan East Circuit, whose capital was at Suzhou. Modern-day Fujian was composed of around 5 prefectures and 25 counties.

The Tang dynasty (618–907) oversaw the next golden age of China, which contributed to a boom in Fujian's culture and economy. Fuzhou's economic and cultural institutions grew and developed. The later years of the Tang dynasty saw a number of political upheavals in the Chinese heartland, prompting even larger waves of northerners to immigrate to northern part of Fujian.

As the Tang dynasty ended, China was torn apart in the period of the Five Dynasties and Ten Kingdoms. During this time, a second major wave of immigration arrived in the safe haven of Fujian, led by General Wang, who set up an independent Kingdom of Min with its capital in Fuzhou. After the death of the founding king, however, the kingdom suffered from internal strife, and was soon absorbed by Southern Tang, another southern kingdom.

Parts of northern Fujian were conquered by the Wuyue Kingdom to the north as well, including the Min capital Fuzhou.

Quanzhou city was blooming into a seaport under the reign of the Min Kingdom and was the largest seaport in the world.
For a long period of time its population was also greater than Fuzhou.

After Liu's death, the circuit was briefly ruled by his biological nephew/adoptive son Liu Shaozi, who was then overthrown by the officers Zhang Hansi and Chen Hongjin. Zhang then ruled the circuit briefly, before Chen deposed him and took over.

In 978, with Song's determination to unify Chinese lands in full order, Chen decided that he could not stay de facto independent, and offered the control of the circuit to Song's Emperor Taizong, ending Qingyuan independent entity.

The area was reorganized into the Fujian Circuit in 985, which was the first time the name "Fujian" was used for an administrative region.

Fujian and Guangdong Chinese moved to the Vân Đồn coastal port to engage in commerce.
During the Lý and Trần dynasties, many Chinese ethnic groups with surname Trần migrated to Vietnam from what is now Fujian or Guangxi.

They settled along the coast of Vietnam and the capital's southeastern area.

The Vietnamese Trần clan traces their ancestry to Trần Tự Minh (227 BC). He was a Qin General during the Warring state period who belonged to the indigenous Mân, a Baiyue ethnic group of Southern China and Northern Vietnam. Tự Minh also served under King An Dương Vương of Âu Lạc kingdom in resisting Qin's conquest of Âu Lạc. Their genealogy also included Trần Tự Viễn (582 - 637) of Giao Châu and Trần Tự An (1010 - 1077) of Đại Việt. Near the end of the 11th century the descendants of a fisherman named Trần Kinh, whose hometown was in Tức Mạc village in Đại Việt (Modern day Vietnam), would marry with the royal Lý clan, which was then founded the Vietnam Tran Dynasty in the year 1225.

Clothing, food, and languages were fused with the local Vietnamese in Vân Đồn district where the Chinese ethnic groups had moved after leaving their home province of what in now Fujian, Guangxi, and Guangdong.
In 1172, Fujian was attacked by Pi-she-ye pirates from Taiwan or the Visayas, Philippines.

After the establishment of the Yuan dynasty, Fujian became part of Jiangzhe province, whose capital was at Hangzhou. From 1357 to 1366 Muslims in Quanzhou participated in the Ispah Rebellion, advancing northward and even capturing Putian and Fuzhou before the rebellion was crushed by the Yuan. Afterwards, Quanzhou city lost foreign interest of trading and its formerly welcoming international image as the foreigners were all massacred or deported.

Yuan dynasty General Chen Youding, who had put down the Ispah Rebellion, continued to rule over the Fujian area even after the outbreak of the Red Turban Rebellion. Forces loyal to eventual Ming dynasty founder Zhu Yuanzhang (Hongwu Emperor) defeated Chen in 1367.

After the establishment of the Ming dynasty, Fujian became a province, with capital at Fuzhou. In the early Ming era, Quanzhou was the staging area and supply depot of Zheng He's naval expeditions. Further development was severely hampered by the sea trade ban, and the area was superseded by nearby ports of Guangzhou, Hangzhou, Ningbo and Shanghai despite the lifting of the ban in 1550.[citation needed] Large-scale piracy by Wokou was eventually wiped out by the Chinese military.

The late Ming and early Qing dynasty symbolized an era of large influx of refugees and another 20 years of sea trade ban under the Kangxi Emperor, a measure intended to counter the refuge Ming government of Koxinga in the island of Taiwan.

The sea ban implemented by the Qing forced many people to evacuate the coast in order to deprive Koxinga's Ming loyalists of resources. This has led to the myth that it was because Manchus were "afraid of water".

Incoming refugees did not translate into a major labor force, owing to their re-migration into prosperous regions of Guangdong. In 1683, the Qing dynasty conquered Taiwan in the Battle of Penghu and annexed it into the Fujian province, as Taiwan Prefecture. Many more Han Chinese then settled Taiwan.

Today, most Taiwanese are descendants of Hokkien people from Southern Fujian. Fujian and Taiwan were originally treated as one province (Fujian-Taiwan-Province), but starting in 1885, they split into two separate provinces.

In the 1890s, the Qing ceded Taiwan to Japan via the Treaty of Shimonoseki after the First Sino-Japanese War. In 1905-1907 Japan made overtures to enlarge its sphere of influence to include Fujien.