On September 28, the Chinese Embassy in Jordan held an online National Day reception to celebrate the 72nd anniversary of the founding of the People’s Republic of China. Yahya Kisbi, Minister of Public Works and Housing, Wajiha Azayzah, Minister of Transport, Abdullah, Vice Chairman of the Joint Chiefs of Staff, Malek Twal, Director of Department of Asia and Oceania of the Ministry of Foreign Affairs and Expatriates, Issa Murad, Chairman of Jordan-China Friendship Committee of the Senate, representatives of Jordan-China Friendship Association and Jordan-China Cultural Cooperation Committee attended the event. The main diplomats of Chinese embassy, Jordanian Director Mamoun Abu Al-Sebaa and Chinese Director Yang Songfang of TAG-Confucius Institute, representatives of Chinese enterprises, Chinese teachers, overseas Chinese students, some envoys in Jordan, major media of China and Jordan, and Chinese women’s basketball team who came to Jordan to participate in the women’s basketball Asian Cup also attended the reception. 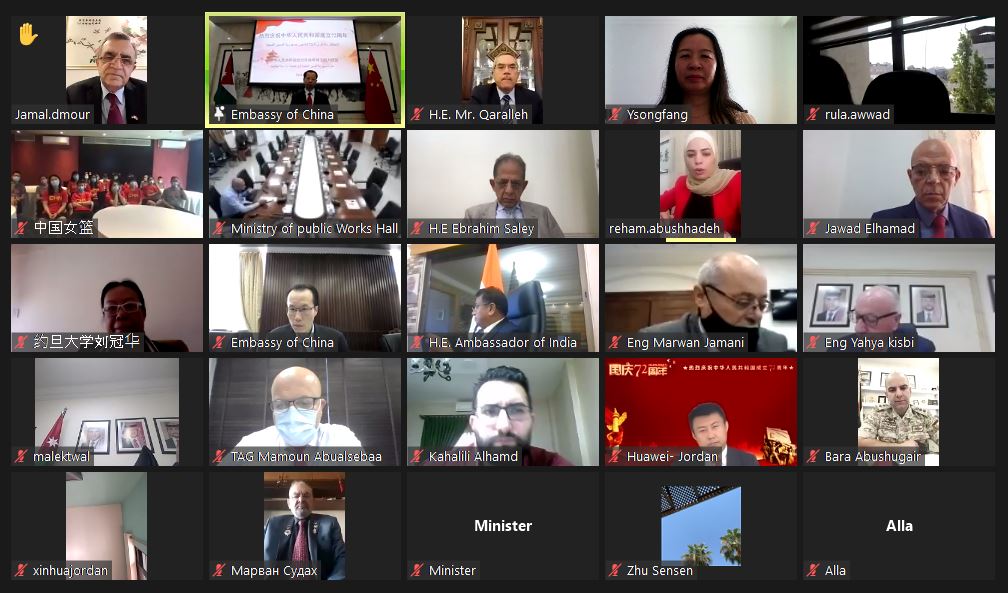 Chinese ambassador Chen Chuandong said in his speech that this year witnesses the 100th anniversary of the Communist Party of China. Today’s China, with political stability, economic development, national unity, social stability, has long become the world’s second largest economy, and its contribution to global economic growth has ranked first for 15 consecutive years. China has built a well-off society in an all-round way, the Chinese people have embarked on a new journey of building a modern socialist country, and the great rejuvenation of the Chinese nation has entered an irreversible historical process. In this process, the Communist Party of China has led Chinese people to open up a great path, made great achievements, forged a great spirit and won the heartfelt support of the people. Today’s China is a builder of world peace, a contributor to global development, a defender of the international order and a provider of public goods. China holds high the banner of peace, development, cooperation and mutual benefit, promotes the building of a new type of international relations, promotes the building of a community of a shared future for mankind, and promotes the high-quality development of “The Belt and Road” initiative, so as to provide new opportunities for the world with China’s new development.

Chen Chuandong stated that since the beginning of this year, under the guidance of Xi Jinping Thought on socialism with Chinese characteristics for a new era, China has kept a foothold on a new stage of development, implemented new development concepts, built a new development pattern, promoted high-quality development, and sustained a stable economic recovery and a steady improvement. The GDP in the first half of the year increased by 12.7% year on year, and the “14th Five-Year Plan” achieved a solid start.

Chen Chuandong spoke positively of Jordan’s centennial history and development achievements, and congratulated Jordanian athletes on their remarkable achievements on the Tokyo Olympic and Paralympic Games. He underlined that China and Jordan have profound traditional friendship. Since the establishment of diplomatic relations, bilateral relations and practical cooperation have achieved fruitful results, and the two countries have maintained close coordination and communication in international affairs. President Xi Jinping and King Abdullah II congratulated each other on the 100th anniversary of the founding of Jordan and the founding of the Communist Party of China, which has marked the way forward and provided an important impetus for the development of bilateral relations between the two countries at a new starting point. He pointed out that China-Jordan trade has rebounded strongly this year, with a year-on-year growth of 18.51% from January to August, and cultural and educational exchanges have gradually recovered.

Chen Chuandong quoted President Xi Jinping and King Abdullah II’s speeches at the UN General Assembly saying that the two sides should fully implement the important consensus of the two heads of state, and take the opportunity of the 45th anniversary of the establishment of diplomatic relations between China and Jordan next year to continue to consolidate and enrich the strategic partnership between China and Jordan and move forward together in the second centenary journey of the two countries.

Kisbi, Azayza, Twal and other Jordanian guests warmly congratulated the 72nd  anniversary of the founding of the People’s Republic of China in their speeches and on the message board, highly praised the great development achievements made by Chinese people under the leadership of the Communist Party of China, spoke highly of Jordan-China relations, expressed gratitude to China for all kinds of assistance to Jordan, actively affirmed the contribution of “The Belt and Road” initiative to the common development and prosperity of all countries, and expressed their hope to strengthen the exchanges of development strategy and governance with China, and looked forward to greater achievements in friendly cooperation in various fields between the two countries.