Traditional Chinese marriage, as opposed to marriage in modern China, is a ceremonial ritual within Chinese societies that involve a union between spouses, sometimes established by pre-arrangement between families. Within Chinese culture, romantic love and monogamy was the norm for most citizens.

Confucian view of marriage
To the Confucians, marriage is of important significance both in the family and in society. In the perspective of family, marriage can bring families of different surnames (different clans) together, and continue the family life of the concerned clans. Therefore, only the benefits and demerits of the clans, instead of the individual couples, are concerned in a marriage. Socially, a married couple is the basic unit of the population; sometimes marriages can affect the country’s political stability and international relations (especially to certain foreign tribes like Mongolians, Manchus, Huns, and Turks); thus marriage can be related to politics. 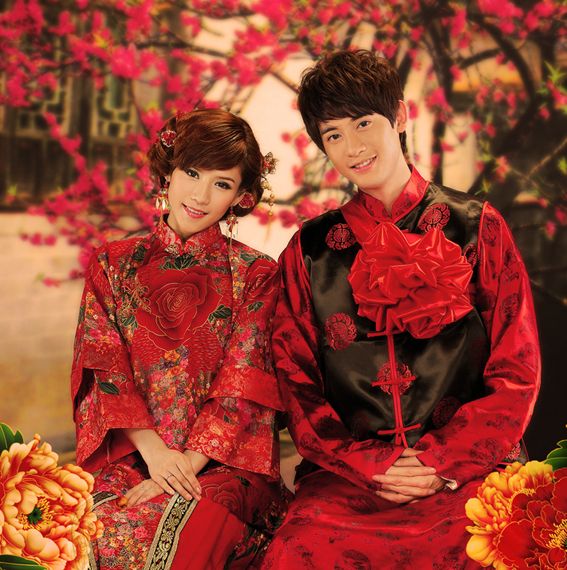 From the point of view of Confucian philosophy, one of the purposes of marriage is the cultivation of virtue.
The Chinese have seen that marriage should be founded on love since the concept of monogamy is rooted in their mindset.

Chinese marriage became a custom between 402 and 221 BC. Despite China's long history and many different geographical areas, there are essentially six rituals, generally known as the three letters and six etiquettes.

Unfortunately for some traditional families, the wife's mother cannot go to her son-in-law's family until one year (according to the Chinese lunar calendar or Chinese Lunar New Year) after the wedding has elapsed. However, during this one year the daughter can go back at any time.

Six etiquettes:
1.    Proposal: After an unmarried boy's parents found a potential daughter-in-law, they located a matchmaker whose job was to assuage the conflict of interests and general embarrassments when discussing the possibility of marriage on the part of two families largely unknown to each other. Marriages were chosen based upon the needs of reproduction and honor, as well as the need of the father and husband.
2.    Birthdates: If the selected girl and her parents did not object to the proposal, the matchmaker would match the birthdates literally: 'the 8 cyclic characters for year, month, day and hour of birth of a man, which determine his fate') in which suan ming (Chinese fortune telling) is used to predict the future of that couple-to-be. If the result of suan ming was good, they then would go to the next step, submitting bride price.
3.    Bridewealth (betrothal gifts): At this point the bridegroom's family arranged for the matchmaker to present a bride price (betrothal gifts), including the betrothal letter, to the bride's family.
4.    Wedding gifts: The groom's family would then send an elaborate array of food, cakes, and religious items to the bride's family.
5.    Arranging the wedding: Before the wedding ceremony, two families would arrange a wedding day according to Chinese tung shing. Selecting an auspicious day to assure a good future for the couple is as important as
6.    Avoiding what is believed to be an unlucky day. In some cases there may be no auspicious dates and the couple will have to review their potential date range.
7.    Wedding ceremony: The final ritual would be the actual wedding ceremony where bride and groom become a married couple, which consists of many elaborate parts (see below):
o    Wedding procession: Before the meeting party's arrival, the bride would be helped by a respectable old woman to tie up her hair with colorful cotton threads. She would wear a red skirt because the Chinese believed red symbolised happiness. When the party arrived, the bride must cry with her mother to symbolize her reluctance to leave home. She would then be led or carried by her elder brother to the sedan. From here, the wedding procession from the bride's home to the groom's home consists of a traditional band, the bride's sedan, the maids of honor's sedans (if there are maids of honor), and bride's dowry in the forms other than money. The most common dowries included scissors like two butterflies never separating, rulers indicating acres of fields, and vases for peace and wealth.
o    Welcoming the bride: The wedding procession of the bride's family stops at the door of the groom's home. In the meeting party the groom would meet a series of difficulties intentionally set in his path. Only after coping with these could he pass to see his wife-to-be.

o    Actual wedding ceremonies: On the arrival of the sedan at the wedding place, there would be music and firecrackers. The bride would be led along the red carpet in a festive atmosphere. The groom, also in a red gown, would kowtow three times to worship the heaven, parents and spouse. Equivalent to exchanging vows in the west, the couple would pay respect to the Jade Emperor, the patron family deities (or patron buddhas and bodhisattvas), paying respect to deceased ancestors, the bride and groom's parents and other elders, and paying respect to each other.
o    Then, the new couple would go to their bridal chamber and guests would be treated to a feast.

o    Traditionally, which the older generation is thought to be more comfortable with. On the night of the wedding day, there was a custom in some places for relatives or friends to banter the newlyweds. Though this seemed a little noisy, both of them dropped shyness and got familiar with each other. On the third day of the marriage, the new couple would go back to the bride's parents' home. They would be received with also a dinner party including relatives.