Most Famous Temples and Monasteries in China

Most Famous Temples and Monasteries in China

Chinese temples and monasteries are well kept cultural artifacts of every dynasty. The temple or monastery culture has deep influence in every aspect of Chinese people’s life, for example, panting, music, sculpture, calligraphy, architecture, folk custom, kongfu and many others. China has innumerable temples and monasteries, among which the following ten got the greatest reputation.

Located east of Luoyang, White Horse Temple is nested between the Luo River and Mang Hill. During the Eastern Han Dynasty, the emperor dispatched several monks to India for the sake of obtaining Buddhist scriptures. They were brought back to China on a white horse, which is why the White Horse Temple got its name. With its distinctive red walls, exquisite palaces and towering pagoda, the temple sits gently amid green pines and cypress groves, adding a solemn and silent quality to the complex.
It is honored as ‘the Cradle of Buddhism in China’.

White Horse Temple is a historic sit with possesses more than 1,900 years with a well-preserved appearance. This great antique architecture can be divided into some parts namely the Hall of Heavenly Kings, Hall of the Great Buddha, Hall of Mahavira, Hall of Guidance and the Cool and Clear Terrace appear in proper order in the temple, as they were when it was first built.

Xiangguo Monastery was originally built in 555 AD during the Northern Qi Dynasty; it has a history of over 1,400 years. In the Northern Song Dynasty, the monastery was enlarged many times and became the largest monastery and the national Buddhist

During the Northern Song Dynasty, it was deeply worshipped and respected by the royal family enlarging for several times, it once occupied an area as large as 500 mu of land, with 64 meditation yards, law yards under its administration, with more than 1,000 monks, being the biggest monastery in the capital city and the center of national Buddhist activities.

First built in 495 AD, Shaolin Temple is famous for Chinese Kung Fu or Martial Arts and the Zen Buddhism wide-spread in East Asia. Shaolin Temple is one of China's most famous ancient temples. Shaolin Temple once had many monks on its premises. Those monks of the lower level mostly came from the secular society and some of them knew some martial arts before entering the temple. Those who knew martial arts taught and helped each other to improve their skills. They also absorbed the experience of their predecessors and gradually developed their martial arts into the unique Shaolin School.
The Shaolin Temple is famous for the coexistence of Chan School and martial art. It became famous in the Sui and Tang dynasties, in early Song Dunasty, the 13-Rod Monk was conferred title of nobility on saving the life of King of Qin. Soon the Shaolin martial art developed into its own system and became famous as the unique Shaolin School among Chinese martial cicles.
During the Yuan and Ming dynasties, the Shaolin Temple housed some 1,000 monks and became a large Buddhist temple known at home and abroad. Today it has become an attractive tourist destination in China.

Located at the center of the old Lhasa, Jokhang Temple is the spiritual center of Tibet. It was built in the mid-seventh century by Songzain Gambo for the Tang Princess Wencheng and Nepalese Princess Bhrikuti. It has a history of more than 1,300 years. The temple is the fine product of Han, Tibetan and Nepalese architecture techniques. Visitors will be treated to the sight of various exotic and sacred sculptures. Jokhang Temple also houses many invaluable cultural relics. Every year, the Great Prayer

Festival is held here. The temple was called the Tsulag Khang or 'House of Wisdom' but it is now known as the Jokhang which means the 'House of the Lord'.
Jokhang Temple has remained a key center of Buddhist pilgrimage for centuries. It was sacked several times by the Mongols, but the building survived. In the past several centuries the temple complex was expanded and now covers an area of about 25,000 sq. meters. There is a walled enclosure in front of the Jokhang which contains some willows called the Jowo Utra ('Hair of the Jowo') and a doring or inscribed pillar erected by the Chinese in 1793 during a smallpox epidemic. It records the Sino-Tibetan treaty of 822 concluded by King Ralpacan and includes 'China and Tibet's vow of eternal peace and mutual respect of the borders of their independent states' as well as advice on hygiene measures to prevent smallpox.
The Jokhang Temple complex has several decorated shrines and rooms. The main hall of the temple houses the Jowo Shakyamuni Buddha statue, perhaps the single most venerated object in Tibetan Buddhism. There are also famous statues of Chenresig, Padmasambhava and King Songtsan Gambo and his two famous foreign brides, Princess Wen Cheng (niece of Emperor Taizong of Tang Dynasty) and Princess Bhrikuti of Nepal.

For most Tibetans it is the most sacred and important temple in Tibet. Along with the Potala Palace, it is probably the most popular tourist attraction in Lhasa. It is part of the UNESCO World Heritage Site 'Historic Ensemble of the Potala Palace'.

Famen Temple is located in Famen town, 120 km west of Xian, Shaanxi province. It was designated as “the ninth wonders in the world” by United Nations educational scientific and cultural organization. From 5-12 May 1987, after the opening of underground palace, four relics claimed to be directly related to Buddha were found. Thereafter, Famen Temple became Buddhist pilgrimage.

This temple is famous for discovery the fingers bones of Sakyamuni. And historical records reveal that eight emperors of the Tang Dynasty once welcomed the finger bones of Buddha to the palace and donated a large number of treasures to the underground palace of the temple.

Confucian Temple (the full name is Temple and Cemetery of Confucius and the Kong Family Mansion in Qufu), as one of the in highlights Qufu, is a must-see attraction when you plan Shandong tour. Confucian Temple is located in the center of Qufu City. In order to commemorate the great philosopher Confucius, this temple was originally built as early as in 478BC, one year after Confucius death. 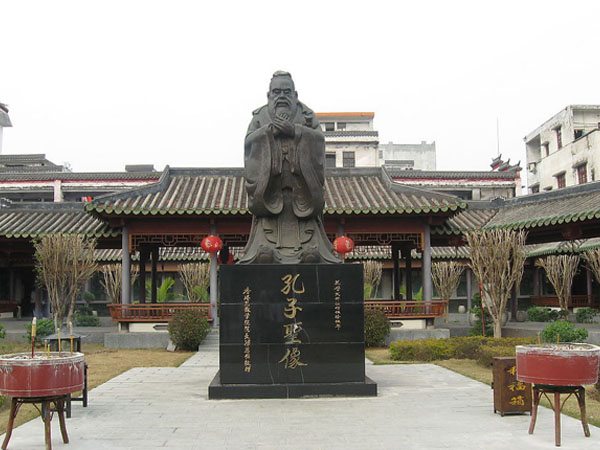 The temple was built according to the specification for imperial palaces; it is one of the three ancient building complexes in our country and holds an important position even in the world. It covers an area of 50 acres. Inside of this complex, there are 9 yards, each among which has its own characters. The temple has an outer wall, with four corner towers, which shelters ancient pines. The main buildings along the middle route are Kuiwen Pavilion, Thirteen Stele Pavilion, Xingtan Pavilion, Dacheng Hall, Hall of Confucius' Wife and Shengji Hall. Among them the Dacheng Palace and the Kuiwen Cabinet are its main buildings.

Zhongyue Temple was first built during the Qin Dynasty (221-206 BC) and was the place where emperors and ministers from various historical periods paid their respects to the God of Mount Songshan in central China. It is the largest and oldest intact building complex among the Five Holy Mountains in China.
It is praised as the palace museum in central China and the sixth paradise of Taoism.
The Zhongyue Temple, the grandest ancient architectural complex best maintained in the Songshan Mountain, are basically unchanged in scale since the remedy of the Qing
Dynasty, covering more than 100,000 square meters with 11 establishments lying one behind another along the axis with a total distance as long as 6.5 km from the first to the last.
https://www.topchinatravel.com/china-guide/most-famous-temples-and-monasteries-in-china.htm