China is an ancient civilization country with a long history. With the hardworking, intelligent and brave, Chinese nation had created many inventions in the history of more than five thousand years and also left countless cultural heritages, which make a great contribution to the progress of mankind. The 10 famous bridges of China is a part of the splendid culture of the Chinese nation, which shows the intelligent of Chinese people. The following is a brief listing of the most widely known 10 bridges in China, which you can have a good knowledge of them. 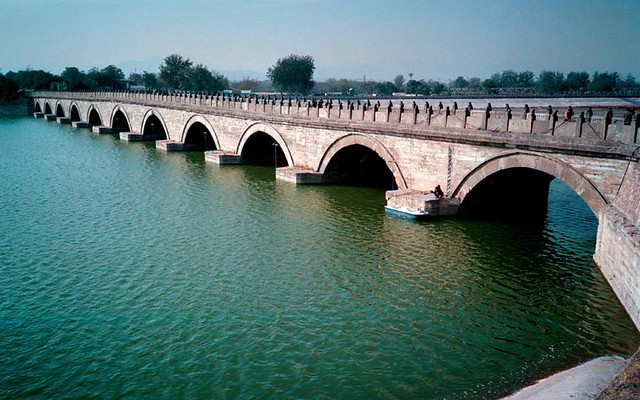 The Marco Polo Bridge or Lugou Bridge is one of the earliest segmented stone arch bridges located 15 km southwest of the Beijing city center in the Fengtai District. First built in 1189, it spans the banks of the Yongding River-a major tributary of Hai River. The bridge is about 265 meters long and has 250 marble balustrades supporting 485 carved stone lions. The bridge became known in the West when Marco Polo talked it up in his writings, and hence called the Marco Polo Bridge in the Western countries. It's also known for a battle that took place here in 1937 and marked the start of the Second Sino-Japanese war.

Five Pavilion Bridge
The Five Pavilion Bridge, also known as Lotus Bridge, located in the West Lake of Yangzhou City of Jiangsu Province, China. First built in 1757 during the Qing Dynasty, it has five pavilions on its 55-metre-long floor. The body of the stone

Bridge is formed on 15 arches of varying sizes, all large enough to allow the passage of boats. The Five Pavilion Bridge likes a belt worn on the narrow waist of Shouxihu, it is one of the signs of the slender West Lake.

Anping Bridge
Anping Bridge, located in the west of Anhai Town, Jinjiang County, in Fuzhou City of Fujian Province. First built in the eighth year of the Shaoxing reign in Southern Song Dynasty (1138), Anping Bridge is the largest ancient stone beam bridge in China which spans the bay between Jinjiang County and Nan'an County. It is also known as Five Li Bridge, because its length is 2,255 meters, about 5 li, where a li is about 500 meters or 0.3 miles. Anping Bridge consists of 361 spans of granite beams resting on top of stone piers and the largest beam weighing 25 tons and the width of the bridge varies from 3 to 3.8 meters.

Anji Bridge
The Anji Bridge, also known as Zhaozhou Bridge or Dashi Bridge, located on the Xiaohe River in Zhaozhou County, Hebei Province. Built in the Kaihuang Period (595-605 AD) of the Sui Dynasty by craftsman Li Chun some 1400 years ago, Anji Bridge is about 50 meters long with a central span of 37.37 meter, stands 7.3 meters tall and has a width of 9 meters, it is the world's largest and oldest open-spandrel stone segmental arch bridge.

Cross Bridge
The Cross Bridge also known as Yuzhaofeiliang (Flying Bridge over Fish Pond), located in front of the Hall of the Goddess in the Jinci Temple of Taiyuan City, Shanxi Province. Built in the Chongning Period (1102) of Northern Song Dynasty, the whole bridge surface is a cross style, hence the name. Nearly a thousand years old, the Cross Bridge is generally regarded as a treasure among ancient Chinese bridges. 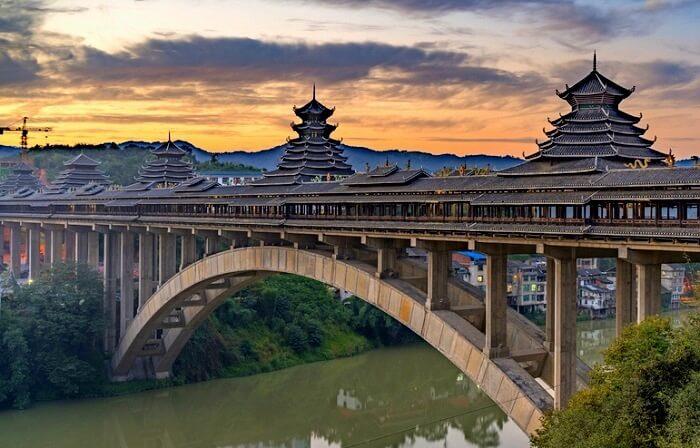 Chengyang Wind-Rain Bridge, also known as Yongji Bridge or Panlong Bridge, located in Sanjiang County of Liuzhou City, Guangxi Zhuang Autonomous Region, and China. Built in 1916, with 64.4 meters long, 3.4 meters wide and 10.6 meters high, it is the crystal of Dong people's wisdom and the largest Wind and Rain Bridge in China.

Luding Bridge
Luding Bridge is a bridge over the Dadu River in Luding County, about 80 kilometers west of the city of Ya'an, Sichuan Province, China. Built in the 45th year (1706) of the Kangxi reign of the Qing Dynasty (1644 - 1911), the whole bridge has 13 iron chains, with its total length of 103 meters and width of 3 meters. Besides, the stele with the bridge's name written by Emperor Kangxi is still hung at one end of the bridge. Luding Bridge is regarded as a historical landmark, because of the soldiers of the Fourth Regiment of the Chinese Workers and Peasants' Army secured the bridge as a river crossing vital to the Red Army during the Long March.

Five Tone Bridge
Five Tone Bridge, located in the sacred way of xiaoling mausoleum of Emperor Shunzhi, in Zunhua County of Hebei Province, China. The bridge is 110.60 meters long and 9.10 meters wide, with 128 stone columns and 4 drum stones on it. It is a special stone bridge which can send out the sound.

Jade Belt Bridge
The Jade Belt Bridge, located on the grounds of the Summer Palace in Beijing, China, is the most well-known of the six bridges on the western shore of Kunming Lake. Built in the year 1751-1764 of the Qianlong reign of the Qing Dynasty (1644-1911) and made from marble and other white stone, it is a beautiful pedestrian Moon bridge and was praised as "Sea Fairy Island". 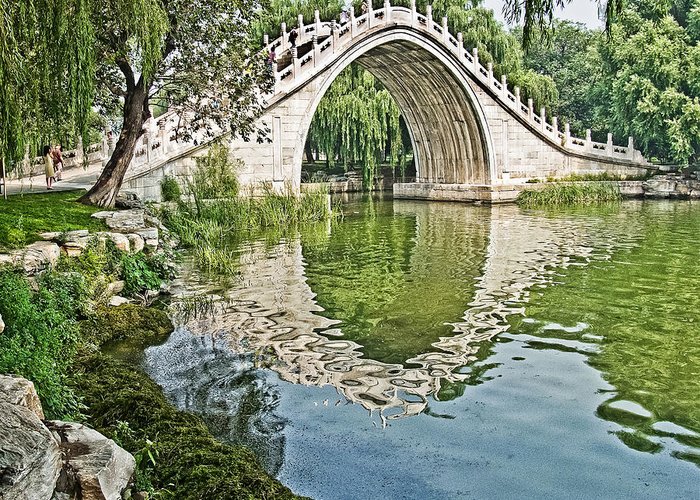