AMMAN - Talal Abu-Ghazaleh Confucius Institute (TAG-CI), a member of Talal Abu-Ghazaleh Global (TAG.Global), has signed a cooperation agreement with Galaxy Training Company, based in Ramallah, to teach Palestinians the Chinese language through training centers spread across the Palestinian territories and run by Galaxy. 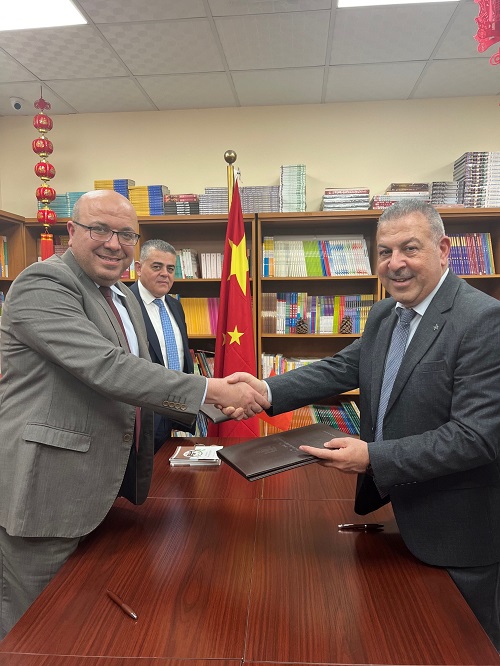 The agreement was signed by Mr. Mamoun Abu Al-Sebaa', executive director of TAG-Confucius, and Mr. Majed Bakeer, Galaxy International Group CEO, at the Institute's headquarters in Amman.
Mr. Abu Al-Sebaa' stressed that the agreement aims to spread the Chinese language and culture in the Palestinian territories attributed to the importance of this language, which is considered to be the language of the future due to its rapid growth.
Mr. Abu Al-Sebaa' said, “HE Dr. Talal Abu-Ghazaleh, TAG-CI chairman, pays special attention to the Chinese culture and language that’s why he established the Institute in 2008; named Talal Abu-Ghazaleh Confucius Institute, with the aim  of introducing Chinese language and culture to the Arab world and achieving larger mutual understanding among Arab and Chinese cultures”. “The Institute was named after the
Great intellectual, mentor and philosopher, Confucius, whose ideas influenced China and other regions around the world for approximately 2000 years,” he added.
For his part, Mr. Bakeer expressed his pride in the cooperative relationship with TAG.Global; attributed to the fact that it is the global, Arab national institution with high-level expertise, skilled cadres, and outstanding record of achievements in business and knowledge.

Mr. Bakeer further referred to the famous saying, “Seek knowledge, even if you must go to China”, therefore, Galaxy Group decided to become the bridge that connects the Palestinian people with China through cooperation with the leading TAG-Confucius Institute, the leading institution in teaching and disseminating the Chinese language and culture in the Arab world.
The agreement included as well cooperation in conducting (Live/online) Chinese training courses at all levels, in addition to children's courses and specialized business courses. The agreement also ensured that Palestinian students wishing to take proficiency exams for the Chinese language and those wishing to obtain scholarships in China will be assisted by holding intensive courses to prepare them for exams.
TAG- Confucius Institute is located in Talal Abu-Ghazaleh University College for Innovation Building in Amman, Makkah Street. It aims to promote the Chinese language and culture in Jordan based on the cooperation agreement between Confucius Han Ban Organization in China, Xinyang University, and Chinese partner universities. It is the first official Chinese language education center that offers the Chinese Language Proficiency Test (HSK) in Jordan.
Galaxy International Group is one of the leading training companies since its inception. It is distinguished by providing the best training solutions in different fields for government and private institutions, companies, universities, and individuals in Palestine. Galaxy maintains the quality standards through its qualified trainers, in addition to its solutions tailored to every individual or institution according to the nature of their work.