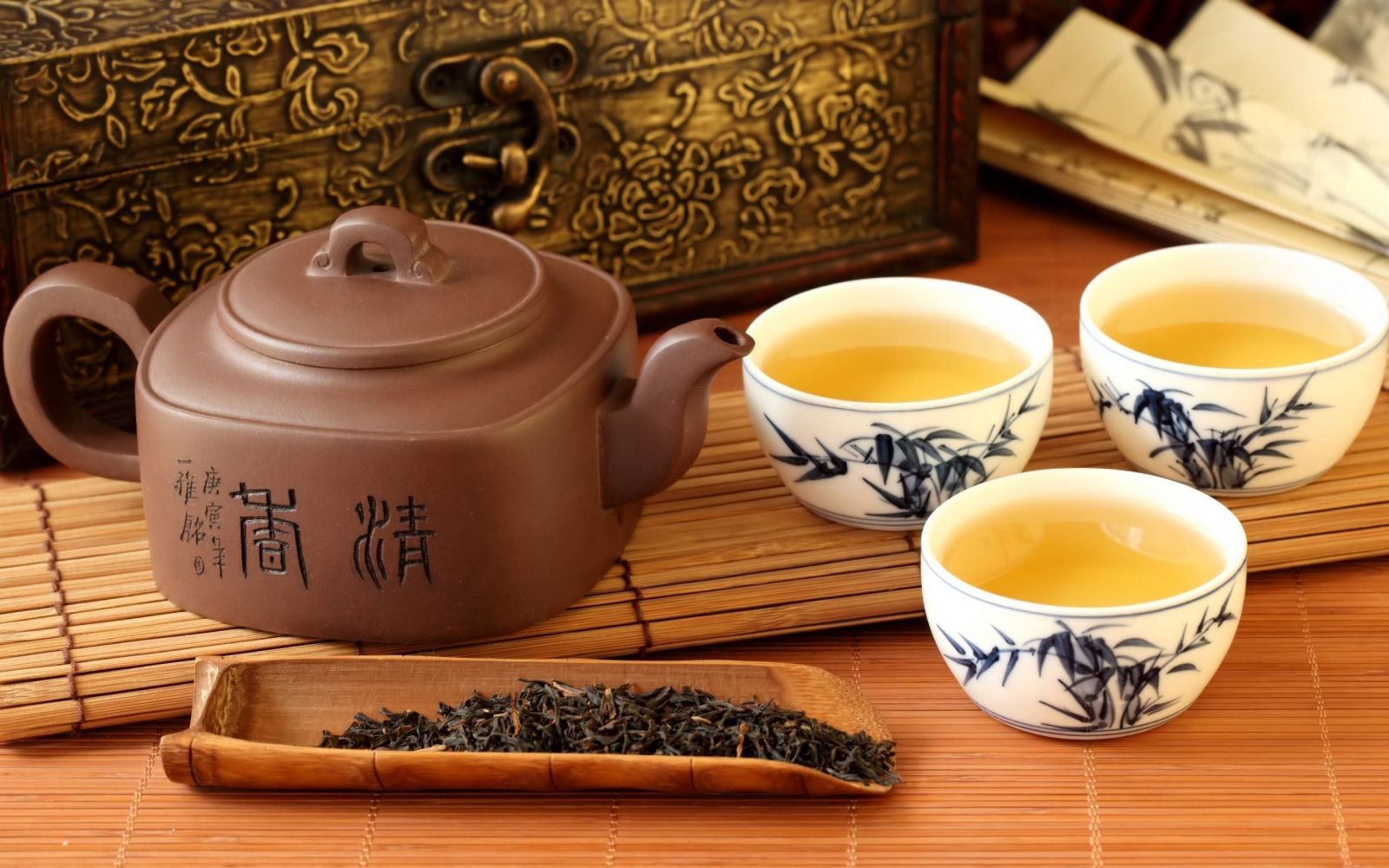 Tea is a beverage made from the leaves of tea plants (Camellia sinensis) and boiled water. Tea leaves are processed using traditional Chinese methods. Chinese tea is consumed throughout the day, including during meals, as a substitute for plain water, well-being or for simple pleasure.
History
Main articles: History of tea in China, Chinese tea culture, and Tea classics

The practice of drinking tea has a long history in China, having originated there. Although tea originated in China, during the Tang Dynasty, Chinese tea generally represents tea leaves which have been processed using methods inherited from ancient China. According to legend, tea was discovered by Chinese Emperor Shen Nong in 2737 BC when a leaf from a nearby shrub fell into water the emperor was boiling.
Tea is deeply woven into the history and culture of China. The beverage is considered one of the seven necessities of Chinese life, along with firewood, rice, oil, salt, soy sauce and vinegar.
Chinese tea can be classified into six distinctive categories: white, green, yellow, oolong, black and post-fermented. Others add categories for scented and compressed teas. All of these come from varieties of the Camellia sinensis plant.

Most Chinese teas are cultivated and consumed in China, in recent years are also exported internationally due to a rise of Chinese cuisine consumption worldwide.
It is commonly available in Chinese restaurants and grocery shops worldwide. Green tea is the most common type of tea consumed in China.
Within these main categories of tea are vast varieties of individual beverages. Some researchers have counted more than 700 of these beverages. Others put the number at more than 1,000. Some of the variations are due to different strains of the Camillia plant.

The Tieguanyin, for example, is traced back to a single plant discovered in Anxi in Fujian province. Other teas draw some of their characteristics from local growing conditions. However, the largest factor in the wide variations comes from differences in tea processing after the tea leaves are harvested. White and green teas are heat-treated soon after picking to prevent oxidization, often called fermentation, caused by natural enzymes in the leaves. Oolong teas are partially oxidized. Black teas are fully oxidized. Other differences come from variations in the processing steps.

Tea households were normally small, family-based operations for tea cultivation.
There were also tea merchants who set up tea firms to create their own tea plantations and/or to process tea leaves after buying from local tea farming families.
Different from tea households, seasonal workers were often employed by tea firms. Seeking work during the harvesting seasons, they often took boats to Tunxi, Anhui and other places where tea leaves were abundant.

In some places of China, in restaurants, it is common for customers to clean their bowls and utensils at the table by rinsing them with tea from the pot. Tea may be poured over utensils into one of their bowls, or a larger bowl is may be provided as a waste receptacle for tea used to rinse bowls. In restaurants in China, tea is usually served in lieu of water, and hence tends to be a light drink flavored.
However, when sipped as a daily beverage, Chinese people tend to use a special personal tea bottle, in which water is allowed to infuse with tea leaves for hours, and sipped continuously.
This method, which is more prevalent in day-to-day Chinese life, involves the repeated use of the same tea leaves throughout the day.

A traditional Chinese tea set consists of special clay or porcelain teapots, teacups, tea spoons, tea strainers, draining trays, tea forceps (for the leaves), a large forceps (for the tea cups) and occasionally, tea caddies. All of these are kept on a special wooden tea tray with an inbuilt draining arrangement and a holder for the drained water. however, in more modern times, specially built electric hotplates for tea sets are used by some Chinese people.