Chinese art is visual art that, whether ancient or modern, originated in or is practiced in China or by Chinese artists. The Chinese art in Taiwan of China and that of overseas Chinese can also be considered part of Chinese art where it is based in or draws on Chinese heritage and Chinese culture. Early "Stone Age art" dates back to 10,000 BC, mostly consisting of simple pottery and sculptures. After this early period Chinese art, like Chinese history, is typically classified by the succession of ruling dynasties of Chinese emperors, most of which lasted several hundred years. 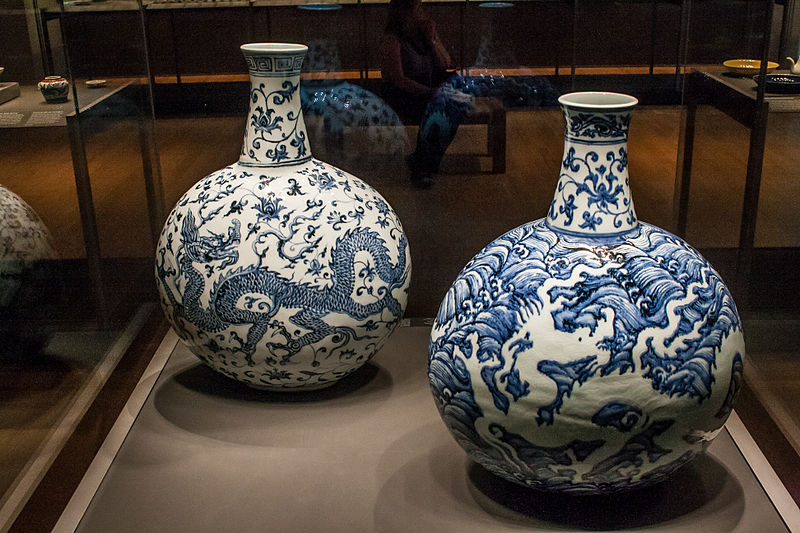 Chinese art has arguably the oldest continuous tradition in the world, and is marked by an unusual degree of continuity within, and consciousness of, that tradition, lacking an equivalent to the Western collapse and gradual recovery of classical styles. The media that have usually been classified in the West since the Renaissance as the decorative arts are extremely important in Chinese art, and much of the finest work was produced in large workshops or factories by essentially unknown artists, especially in Chinese ceramics.
Much of the best work in ceramics, textiles, carved lacquer, and other techniques was produced over a long period by the various Imperial factories or workshops, which as well as being used by the court was distributed internally and abroad on a huge scale to demonstrate the wealth and power of the Emperors. In contrast, the tradition of ink wash painting, practiced mainly by scholar-officials and court painters especially of landscapes, flowers, and birds, developed aesthetic values depending on the individual imagination of and objective observation by the artist that are similar to those of the West, but long pre-dated their development there. After contacts with Western art became increasingly important from the 19th century onwards, in recent decades China has participated with increasing success in worldwide contemporary art.

Traditional Chinese painting involves essentially the same techniques as Chinese calligraphy and is done with a brush dipped in black or colored ink; oils are not used. As with calligraphy, the most popular materials on which paintings are made of paper and silk. The finished work can be mounted on scrolls, such as hanging scrolls or handscrolls. Traditional painting can also be done on album sheets, walls, lacquerware, folding screens, and other media. 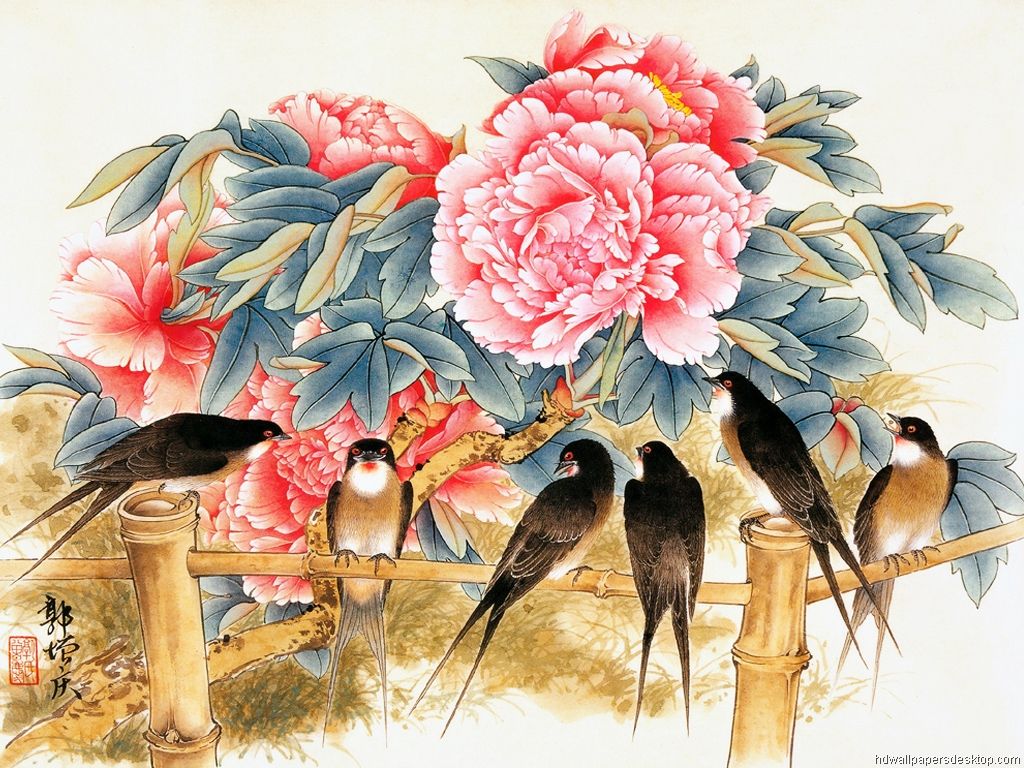 The two main techniques in Chinese painting are:
•    Gong-bi (工筆), meaning "meticulous", uses highly detailed brushstrokes that delimits details very precisely. It is often highly colored and usually depicts figural or narrative subjects. It is often practiced by artists working for the royal court or in independent workshops. Bird-and-flower paintings were often in this style.
•    Ink and wash painting, in Chinese Shui-mo or also loosely termed watercolor or brush painting, and also known as "literati painting", as it was one of the "Four Arts" of the Chinese Scholar-official class.
In theory this was an art practiced by gentlemen, a distinction that begins to be made in writings on art from the Song dynasty, though in fact the careers of leading exponents could benefit considerably.
This style is also referred to as "xie yi" (寫意) or freehand style.
Artists from the Han (202 BC) to the Tang (618–906) dynasties mainly painted the human figure. Much of what is known of early Chinese figure painting comes from burial sites, where paintings were preserved on silk banners, lacquered objects, and tomb walls. Many early tomb paintings were meant to protect the dead or help their souls get to paradise.

Others illustrated the teachings of the Chinese philosopher Confucius, or showed scenes of daily life. Most Chinese portraits showed a formal full-length frontal view, and were used in the family in ancestor veneration. Imperial portraits were more flexible, but were generally not seen outside the court, and portraiture formed no part of Imperial propaganda, as in other cultures.
Many critics consider landscape to be the highest form of Chinese painting. The time from the Five Dynasties period to the Northern Song period (907–1127) is known as the "Great age of Chinese landscape". In the north, artists such as Jing Hao, Li Cheng, Fan Kuan, and Guo Xi painted pictures of towering mountains, using strong black lines, ink wash, and sharp, dotted brushstrokes to suggest rough rocks. In the south, Dong Yuan, Juran, and other artists painted the rolling hills and rivers of their native countryside in peaceful scenes done with softer, rubbed brushwork. These two kinds of scenes and techniques became the classical styles of Chinese landscape painting.
https://en.wikipedia.org/wiki/Chinese_art